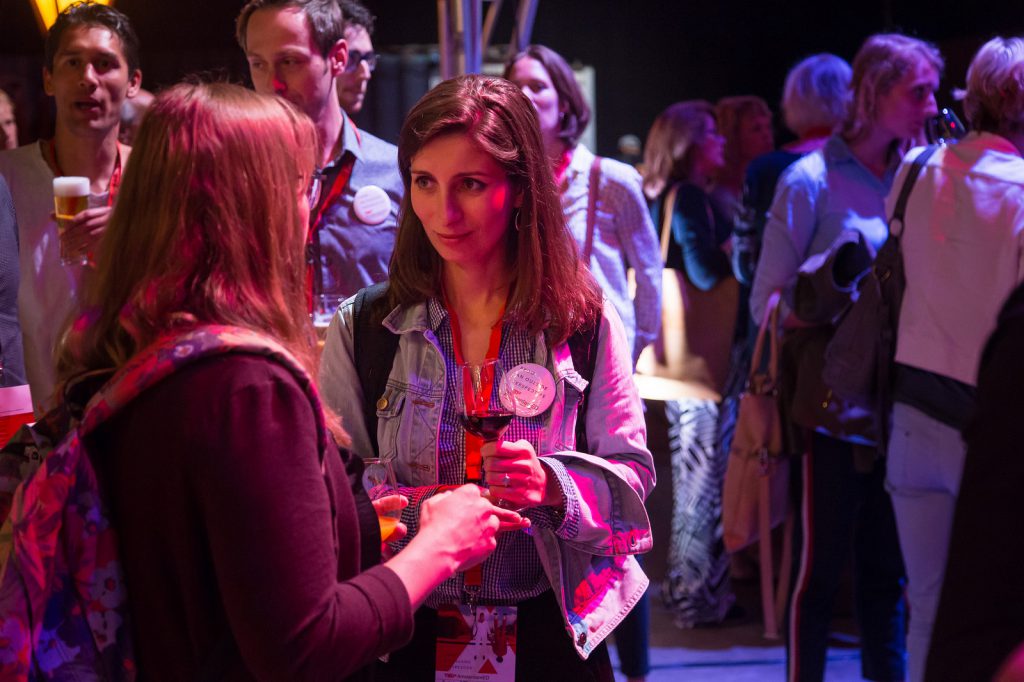 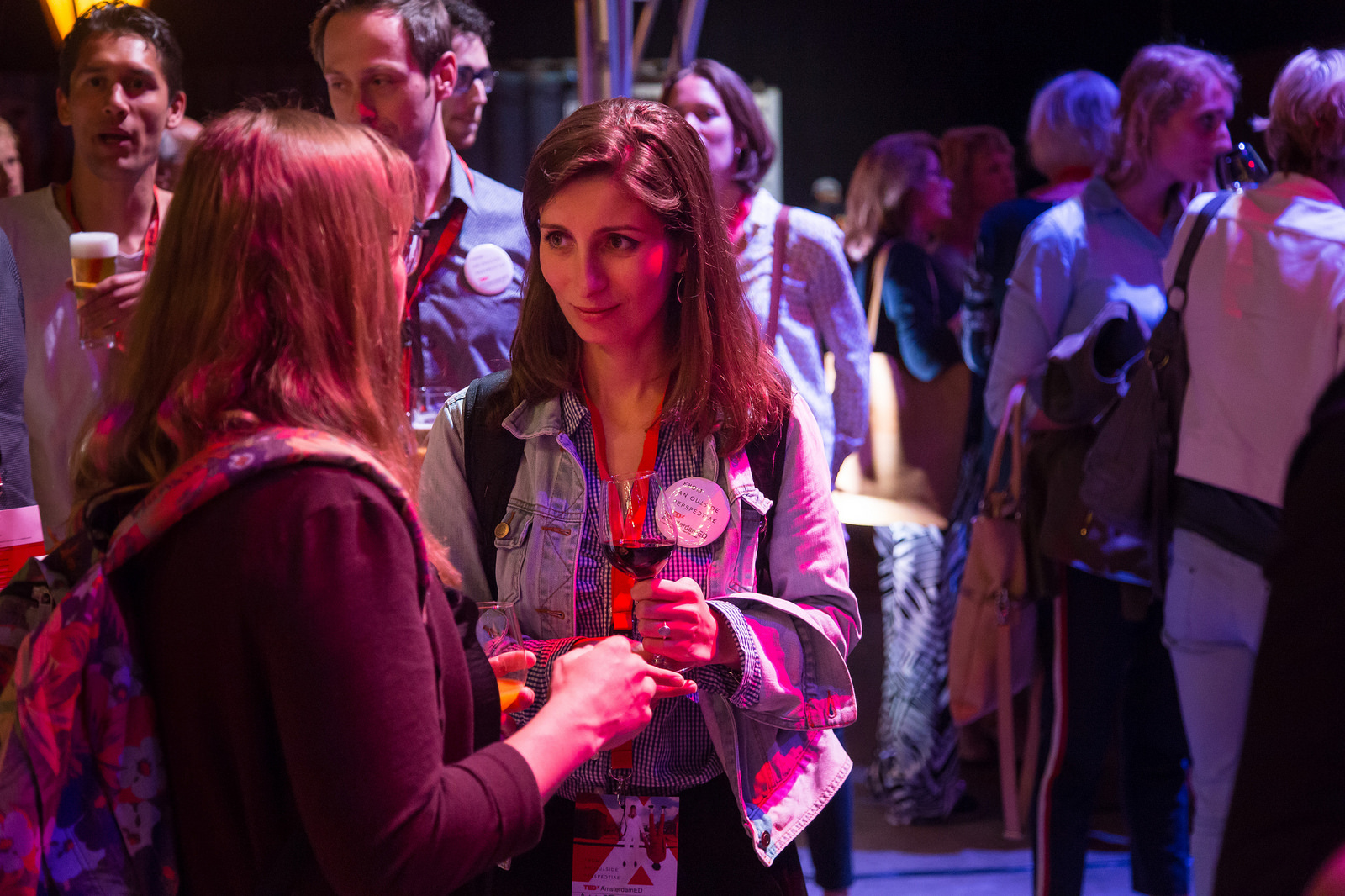 From an Outside Perspective
I only decided to join the TEDxAmsterdamED team as a blogging partner on the evening before the event on the 31st of May, a spontaneous choice that my friend Jessika Lynch made possible. This was certainly the first event for Quirk Heaven and looking at the program I immediately saw a connection – the state of the education nowadays seen from the different perspectives of the speakers. The location was also a first for me, I was curious about Theater Amsterdam ever since I was working in the Houthaven area and I saw it raising up from it’s first brick. But seeing it from the outside is nothing compared to what it looks like from within.

The amphitheater was packed (mostly of women, while the speakers were all men with just 2 exceptions), I grabbed a chair by the aisle and the first thing I saw were the 4 weirdos behind computers with long black wigs. They are Urland Performance Collectief, a “we do whatever we feel like at the moment” group as they describe themselves. Their witty and funny remarks throughout the show brought the much necessary salt and pepper to balance otherwise a serious event, and considering the act was fully improvised all I can say is Chapeau. The talks were truly inspiring: some quite awkward, rather poorly presented and not at all rising to the TED standards but most of them shined of inspiration:

The session began with Niels Huismans, who spoke about Lifelong Learning and how we should all master the “explain it to me like I’m a 5 year old” – Niels, I really hope you are not using words like “formal” and “informal” when talking to your 5 year old nephew ? Professor Jelle Jolles talked about the teenage brain, that reaches full maturity only after 25 years, and why the absurd adults can’t understand that beer and drugs are soooo good man! Anthony Heidweiller sang about overcoming his stuttering through music and how a personal limitation can b-b-b-boost you to become the best version of yourself.

The first part concluded behind the stage, right in the middle of the interactive program, which featured, surprisingly, a real scale ferris wheel, which I gladly tried myself! This was for me just as spectacular as the show: interactive workshops in containers, a couple of expo stands with cool Quirk Heaven material (I’ll get to that a bit later), books of all sorts, a dj (Okapi) and other quirky presences came to spice up the atmosphere. I really wanted to join the workshops but because they happened 4 or 5 at a time, it was a challenge to choose. I first went to a speed learning session, “How to use Snapchat”, very interesting for teachers I can imagine, a step by step demo on how to attach bunny ears and anime eyes to your own photo. Then I arrived in the middle of the Joepie Klass, during which I tried to Crack my inner talent but since I didn’t arrive in the beginning, all the post-it were over, therefore I was left to find my talent on my own. The exercise is simple: pick a word, make a sentence, then 5 sentences, then write the first thing that pops into your mind and so on. The goal is stimulating the right side of the brain, responsible with creativity and self awareness, as opposed to the left part which does most of our brain’s job, on a fully rational, robotic level.

Next workshop I attended was “How to start a conversation” and was hosted by the sparklingly cheerful Salma Berrada, future architect and student at the Delft University. Her energy is contagious and when she says “talk now to a complete stranger!” you just do it, not even acknowledging it’s one of the most socially difficult situations you can ever get yourself into, only to realize a few minutes later that once you start the conversation, you almost can’t stop it. Salma, you rock!

I talked to the insanely tall guys about their device that makes it easy to carry the snowboard and stepped into virtual reality to put out a fire, exercise provided by TinQwiseand got complimented by Breekjaar, an NGO who supports young people to take a leap year after finishing school.

Next in the program, Thijs Homan talked about embracing the chaos of organizational change, because in every company there’s something much more powerful and influential than leadership, the mighty GOSSIP. Frank de Wit brought photos of his 4 children and showed us how he saved his marriage by implementing scrum methods – yes folks, when everything fails, enroll them in the army (this reminded me of the Von Trapps!). Then came this guy, Liam Tjoa, who convinced us that being 20 and clueless is something we can all learn a lot from. And that Snapchat is cool (I truly agree!). Then came my favorite speaker of the day: Stephanie Akkaoui Hughes, architect, a real innovator all constructors should love: what if the architect’s job is not to determine the whole project, but only 70% of it? Let the people work out the rest. Jokes aside, I’m so inspired by one of her anecdotes:

An architect is asked to design a school with campus. She draws up the plans and leads the constructor to erect the buildings, then announces the project is done. The contractor comes to see the result but is surprised to see there are no walking paths to connect the amenities, only grass. The contractor gets angry for the unfinished project, to which the architect smiles and asks for 3 weeks extra. 3 weeks since the opening, the grass shows natural walking paths formed by people walking from one building to the other, and they certainly don’t look straight. Those are the flows that people using this space created, curvy, not straight as one would first assume. Longer, not short. Those are the roads, as they’re created by the natural dynamics.

Then came Ivan Words, the slam poet, with some food for thought wrapped in quirky word games “By opening our Bill’s Gates we can get Steve’s Job”. Then came Ilias El Hadioui, who talked about the social inequality and why school culture is different than street culture a.k.a. I didn’t choose school life, school life chose me! The youngest speaker, just 12 years old, Kleine Mo followed on the stage and presented his movie, this guy made A DOCUMENTARY about racism in the daily life! Now for me that’s jaw dropping. I remember when I was 12, my greatest ambition was still to ride a pony. This little guy is the new Martin Luther King. Almost over, the stage is taken by Rolf Winters and his new age film, Down to Earth. Captivating while leaving a bitter taste in the mouth, Rolf tells us between the lines how corporate life pushed him away from civilization so harsh that he took his wife and kids on a 5 year journey around the world in search for meaningful connection. They also made a movie. The speech sessions concluded with Cha-Hsuan Liu, who revealed the sad secret of the always high-performing asian students, which we partly knew already: work hard, play not.

The speeches were intertwined with artistic performances: ballet, the Urland group which shared the job of MC with Drew Wackerling, a choir and a jungle dance.

Most of the people attending the event came to get inspired. Some came for their school projects, like Eveline and Daniel from the Windsheim University in Zwolle. Others came for their work projects, like Tim Navis and Ilina Scott from Google – Google gives its employees the possibility to allocate 1% of their working time on a project of their choosing to find ideas for their project. I took a quick pulse to find out which was the most popular session according to the public, and the answers varied according to the all so different purposes, but Stephanie and Rolf were mentioned the most.

To wrap it up, it was an inspiring and surprising event, very well organized, however if I were to be picky, I would say that putting the food and drinks in the middle of the interactive program diverted the attention and created extra chaos. I found it quite a challenge to attend the workshops, which were also happening simultaneously, and so in order to get the get the most of it you sometimes had to talk with your mouth full. But that’s pretty much the only fly in my Martini, which only leaves me excited to attend the next TED event.