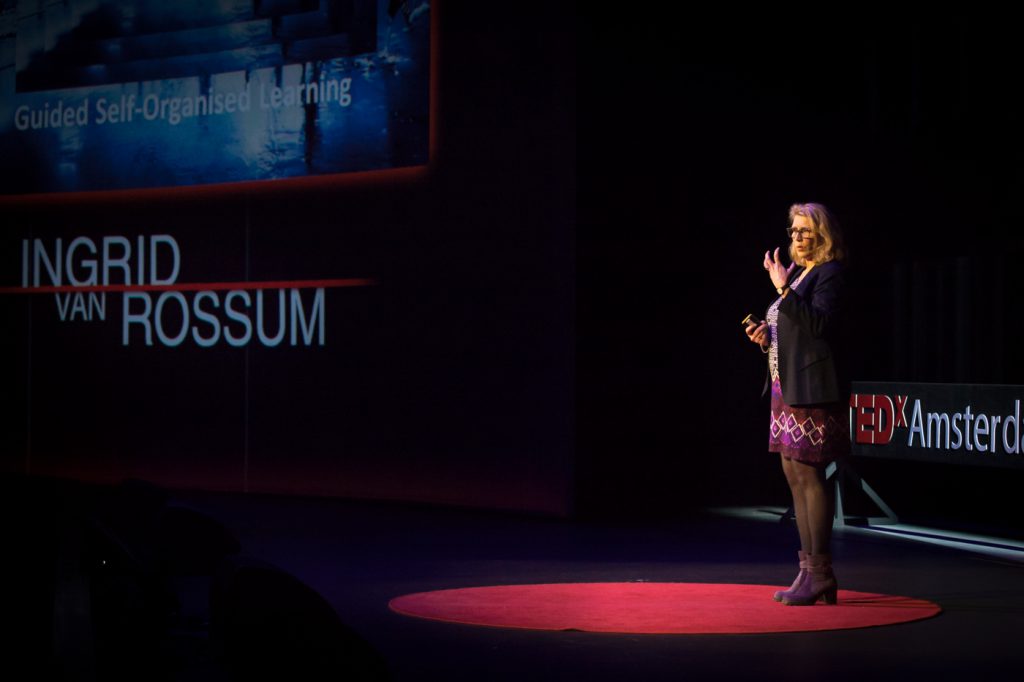 Ingrid van Rossum’s talk focussed on what she took away from her own education, how it shaped her life and influences her to this day.

Ingrid’s secondary education took place in an experimental setting, in which students and teachers created their learning and teaching experiences together. It was an open and free environment which opened her heart and mind to learning. Moving onto further education at an Amsterdam university, her experience was very different. Instead of open spaces with a great deal of interaction between students and teachers, she encountered a factory-like institution, where she was one of many and where she did not play a part in shaping her education at all. She does believe, however, that the contrast between these experiences has set her up for life.

When she was diagnosed with a serious illness in her twenties, she used the method she was taught in secondary school with her medical team: she consulted with them throughout and about her treatment. Ultimately, she credits her recovery partly to this interactive way of working with the medical professionals.

In Ingrid’s early working life, she was part of a mixed and hard-working team, and enjoyed working under an inspirational leader. As she states, they “worked hard and played hard,” and grew both in business and as people. In contrast to this, she also encountered more traditional ways of working for which her university days had prepared her.

Ingrid co-founded a school for entrepreneurship, in which students/entrepreneurs work in a team guided by a coach for four years. Within the program, students set up a business, work as entrepreneurs and learn by doing. They are in charge of the process through a method called Guided Self-Organised Learning. Seven years in, there are a lot of labs in the world in which the students learn through this method. And on March 9, 2015, the Dutch government approved the establishment of a Bachelor in Entrepreneurship, a great achievement and a long-held dream.

There are three key elements to Ingrid’s vision:

Ingrid wants her audience to take two things away from her talk: